After the successful launch of their first ‘veggie only’ branch in Soho, Pret A Manger are due to open a second one in London this year!

The new branch will open at Great Eastern Street in Shoreditch on the 4th of April. And that’s not all, they are also launching 20 new recipes onto their menu- Including mac & cheese and vegan chocolate brownies, what’s not to like?

“The next stop for Pret will be the US, where we’ll be launching a new veggie range in all our US shops at the end of April

Dominika Piasecka, a spokesperson for the Vegan Society, said: “We are very pleased that Pret are recognising the increasing demand for vegan food by opening a second Veggie Pret shop, this time permanently. As more customers learn about the ethical, environmental and health benefits of the vegan lifestyle, many businesses have been reacting positively by introducing vegan choices.

“Offering vegan options in restaurants makes clear commercial sense – businesses are opening potential market up to not only half a million vegans in the UK, but also to a million more vegetarians, the huge number of meat and dairy reducers, the lactose intolerant, and others who simply enjoy vegan food from time to time.” 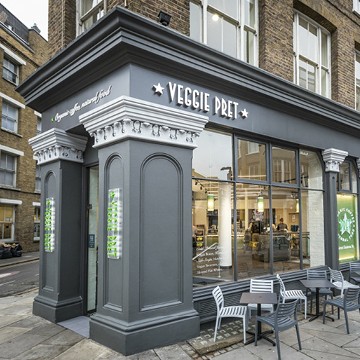